Do you like the idea of improving your fitness without having to be inside at a gym?

Lowestoft Town Council is currently considering options and budget to install outdoor exercise equipment in two parks in the town. At Fen Park in Kirkley there is the possibility of an assault course specifically with teenagers in mind, and at Normanston Park an outdoor gym with a range of equipment.

We are keen to hear your thoughts on these projects. If you feel they should proceed in these locations and/or if they are something you would use, get in contact with us through our email admin@lowestofttowncouncil.gov.uk or contact us on our Lowestoft Town Council page on Facebook.

Lowestoft Town Council is disappointed the annual service at the war memorial on Remembrance Sunday has been suspended due to Covid-19. As we enter another period of lockdown, during which we will wish to remember all the men and women who fought to protect our country, the council and local figures have come together to create a virtual Remembrance service. With words from Councillor Alan Green, Mayor of Lowestoft, Royal British Legion Chairman, Phill Turner and poem readings from students of Ormiston Denes Academy and filming by Joshua Freemantle (‘Life of Lowestoft’), the Mayor asks, “that you observe the rules, stay safe, stay well and do all you can to protect our community the brave and selfless people of Lowestoft fought so hard to protect for you”. 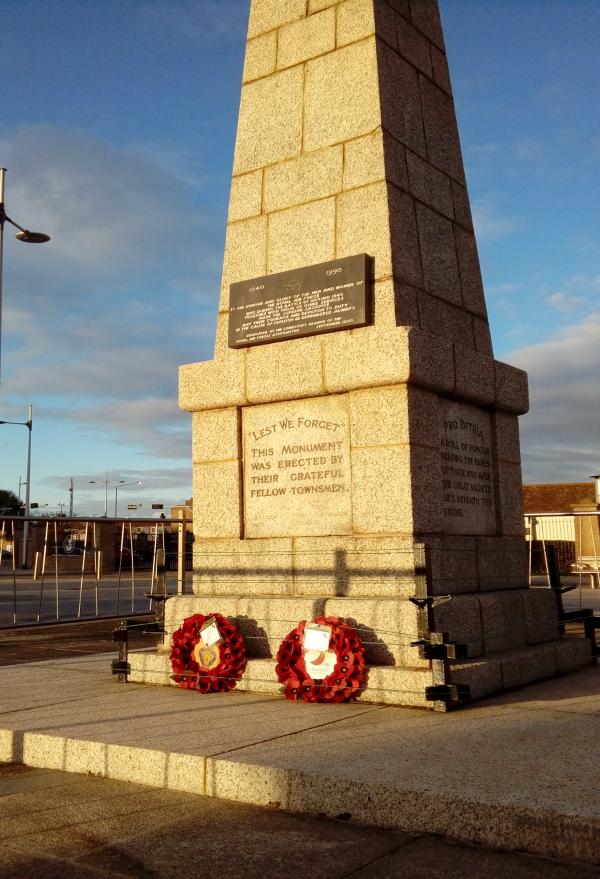 We ask you to join our service which will be livestreamed on YouTube at 10:45am, accessible through Facebook or on our website on Remembrance Sunday, 8th November 2020.

We are grateful to both Royal British Legion Lowestoft & District Branch, Parade Marshall Kevin Smith, Joshua Freemantle and pupils of Ormiston Denes Academy for making the service possible. You are also invited to listen to a selection of reflective contemporary and traditional poem readings read by the students, including ‘In waters deep’, ‘Why we wear a poppy’ and ‘A tribute to the millions’, which can be found on our YouTube playlist.

We are pleased to announce that a short film, 'Lest We Forget', will also premiere on these platforms on Friday, 6th November 2020. With a poignant insight into the war graves and cross of sacrifice at Lowestoft Cemetery, considerate to the loss of life the town was subject to in both of the world wars. With moving words from Alan Green, Mayor of Lowestoft and with special thanks to Henry Baker for filming, and local historians Ivan Bunn and Bob Collis for making this film possible.

You may also wish to show your respects for the fallen by observing a two minutes’ silence at 11.00 am from your doorstep or by displaying a poppy in your window. Poppy templates are available on the Royal British Legion website. 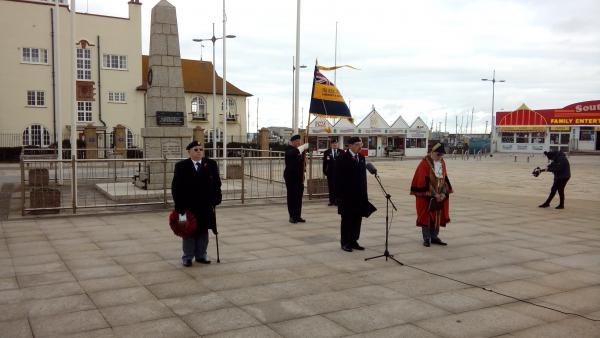 Thank you to all those who laid wreaths across Remembrance Sunday and Armistice Day during these challenging times. In addition, thank you for the positive response and community support from our Remembrance Virtual Service, which was streamed on YouTube on Sunday.

The Town Council are hopeful to return with a full service and parade for Remembrance Sunday 2021.

The Town Council were pleased to support this event at Crown Meadow on 23 October. Below is the recount as written by local Historian Bob Collis. A fitting story as we enter look to Remembrance Sunday and Armistice Day to commemorate the town’s effort in both World Wars and pay respects to the fallen.

There have been some pretty colourful and unusual "away teams" visiting the hallowed turf of the Crown Meadow football ground in Lowestoft over the years. However, probably the strangest sight to invade the pitch was a German bomber exhibited there 80 years ago.

The day Lowestoft Town Football Club had a German Dornier 17 bomber exhibited on the centre spot was recalled at a special event on Friday 23 October.

The event was suggested by aviation historian Bob Collis, who has spent decades researching the wartime history of the area and has a photograph showing the bomber standing on the pitch being inspected by local people.

The aircraft, a Dornier Do 17Z from the Luftwaffe unit 8/KG.76, was shot down by Spitfires over Kent on 15 September 1940, a date which used to be celebrated as Battle of Britain Day. The bullet riddled bomber crash landed at Castle Farm, Shoreham with three of the crew wounded, one fatally.

The Dornier was one of a number of shot down German aircraft taken on tour by the British authorities to boost morale, raise funds for the war effort and give people a chance to look at Hermann Goering's  much-vaunted Luftwaffe at close quarters. For 6d (sixpence) towards the "Spitfire fund" local people were allowed entrance to the Crown Meadow and a close inspection of the raider. A set of steps were placed next to the aircraft and people were able to peer inside the cockpit. Several who recall visiting the unusual exhibition remember being quite horrified to see dried blood stains still extant on the gunner's seat inside.

The aircraft arrived in sections on two RAF "Queen Mary" low-loaders  on 23 October 1940, during the closing weeks of the Battle of Britain and was reassembled using a small crane.

Mr Collis also read a message from Dave Brocklehurst, MBE, the Chairman of the Kent Battle of Britain Museum Trust at Hawkinge. In it Mr Brocklehurst reminded everyone that there was only one surviving Battle of Britain fighter pilot still living, Group Captain John "Paddy" Hemingway, now 101 years old. Mr Brocklehurst said "I am sure that "Paddy" would have approved, knowing that the good people of Lowestoft are holding their own commemoration today, but more importantly, remembering."

"I am very grateful to Councillor Alan Green, Mayor of Lowestoft, and the Directors of the club for allowing us to mark the event in this way. History and heritage events of this kind are very valuable to local communities and it is profoundly important we keep our unique local heritage in the public eye" added Mr Collis. 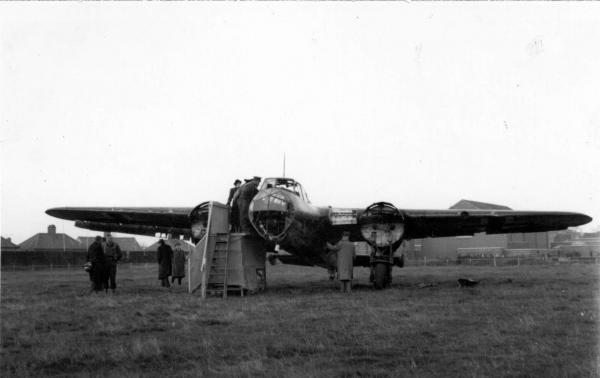