A new memorial plaque, commissioned by Lowestoft Town Council and commemorating the 85th Anniversary of the loss of the Steam Drifter “Reclaim” will be unveiled on Lowestoft’s South Pier following a short ceremony at 10:30am on Saturday 19 November.

In the morning of Friday 19 November 1937, having just left the harbour on its way to the fishing grounds, the Steam Drifter “Reclaim” was run down and sunk in a squall by the Steamer “Hurunui”, just a few miles offshore. In total, nine crew members lost their lives during this tragedy – two from Lowestoft, one from Beccles and six from Kessingland – with only one surviving crew member, the cook Samuel Mortishire, from Lowestoft.  Each of these lives, plus the life of the owner of the “Reclaim”, Robert Utting of Kessingland, are commemorated by name on this memorial.

Speaking about the memorial plaque to the “Reclaim”, Cllr Andy Pearce said, “Lowestoft is justifiably proud of its long association with the sea, including its fishing history and heritage. There are people in Lowestoft today who spent much of their working lives at sea, or working in one of the onshore industries linked to the fishing. There are others of us who have parents, grandparents, or great-grandparents and other family members whose lives were closely intertwined with the fishing industry. But it could be a hard and dangerous life: down the years many boats were lost, and their crews with them, and in many cases those men have no grave but the sea. But they are not forgotten: local people today still remember and pay tribute to family and friends who lost their lives at sea, and we try to add our own contribution with memorials like this one.

“The “Reclaim” was from an earlier generation of boats and crews, and her sinking occurred less than two years before the outbreak of the Second World War which was to claim many more local lives: but her loss would have left its mark on the families, friends, and communities of those men who went down with her. Those who skippered and crewed the Lowestoft fishing boats did not just come from Lowestoft: many came from the surrounding parishes and villages. On the “Reclaim” alone, there were men from Lowestoft, Kessingland, and Beccles. For Kessingland, the “Reclaim” tragedy represented the worst peacetime loss of life at sea in almost 50 years: some of the families still live in the village and Kessingland will also be holding its own memorial service on a separate date to be confirmed.

Lowestoft Town Council would like to thank Associated British Ports and the Lowestoft South Pier Management Committee for allowing this memorial to be placed on the Pier, and also LaserUs and Darren Breeze Woodturning for designing, making, and installing the memorial plaque. With thanks also to the Port of Lowestoft Research Society for use of the photograph of the “Reclaim”. 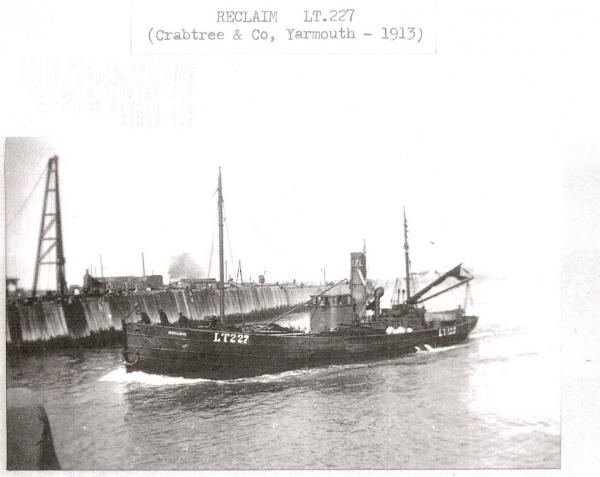 Photo of the "Reclaim", used with kind permission from the Port of Lowestoft Research Society