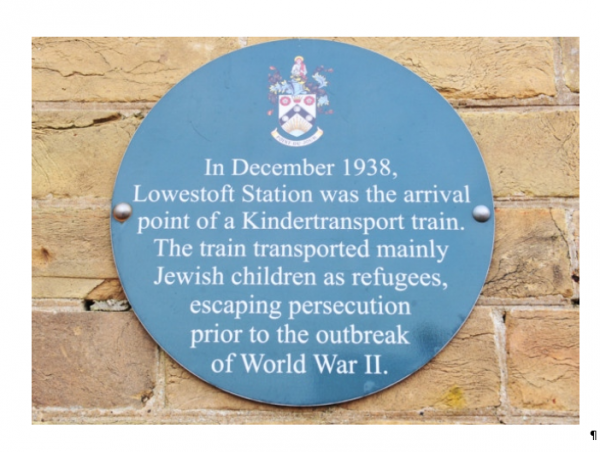 Holocaust Memorial Day is on Monday 27th January, and at Lowestoft Train Station children and adults will gather to remember the Holocaust and the role the people of the town played 75 years ago. Over 500 children arrived at Lowestoft station with the majority leaving their homes in Vienna and being separated from their families who they would never see again.

Holocaust Memorial Day is the day for everyone to remember the millions of people murdered in the Holocaust, under Nazi Persecution, as well as in the genocides which followed in Cambodia, Rwanda, Bosnia, and Darfur. The Holocaust Memorial Trust has designated at theme of Stand Together for the 2020 and the Town Council hopes that is what people in Lowestoft will do on Monday 27th.

The commemoration will commence at 10.00 am with drama students from Ormiston Denes delivering a promenade performance of Suitcase 1938. At 10.30 am, the Mayor of Lowestoft, Councillor Alice Taylor, and Ben Parish from Lowestoft Community Church will lead a service of reflection with words and prayers being shared as well as a minute’s silence being observed. Wreaths will be laid by the Mayor and the Chair of the Waveney Youth Council. The Mayor commented that “we want to remember and reflect that even in the darkest of circumstances, there are shining examples of what is best in the human spirit”.

The event organised by Lowestoft Town Council is taking place at Greater Anglia Lowestoft Railway Station and is supported by the Wherry Lines Community Rail Partnership and the Lowestoft Central Project who have made the newly restored Parcels Office available. All are welcome to attend.