Home > Local Info > Things to do in Lowestoft > Theatres and Cinemas

The Marina Theatre is in the centre of the town and puts on an array of shows throughout the year. With a mixture of live entertainment and great cinema the Marina Theatre, in Lowestoft, is at the cultural heart of the community. These include performances by the Royal Philharmonic Orchestra, comedians, and singers as well as pantomimes and movies.

The original theatre started life in the 1870’s as a roller skating rink, where the owners erected a make-shift stage and renamed it The Rink Theatre. The ‘Rink’ was converted into the Marina in 1897 and, on April 26, the Haymarket Drama Society were the first to perform on the stage with Peter the Penman by Sir Charles Young. The basis of our current theatre building was then erected, largely on the foundations of the original, and was designed by Ernest Runtz and Co.

The Marina operated as a live venue until 1929 when the onset of cinema made the future uncertain. Briefly used during the Second World War as a temporary mortuary and a reception centre for evacuated children, the Marina began to struggle in the late 1960’s with the introduction of colour television and this resulted in cinema attendances dropping, The Marina soldiered on as a cinema before finally closing on Christmas Eve, 1984.

After being bought by Waveney District Council in 1985, 24 hours before a demolition deadline, set by EMI, the Marina underwent a huge renovation which included the reconstruction of the dressing room area and the construction of a new toilet block to serve the circle and bar areas. On October 1, 1988, almost four years after its closure, the Marina re-opened as the new Civic Theatre and Cultural Centre in Lowestoft with a concert given by 1970’s rock and roll star Rick Wakeman.

In 2011, the Theatre again faced an uncertain future but was saved due to the formation of the new Marina Theatre Trust. A number of highly experienced people from both the local community and theatre industry were recruited and have worked in a united attempt to ensure the theatre’s future success. Early in 2012 the Trust announced ambitious plans to extend the theatre’s public areas to include the creation of a ground floor Café Bar, new office facilities and improvements to the venues loading area. Following an enormous fundraising effort were officially opened in September.

Since then, the Marina Theatre has staged a whole host of West End musicals, top class comedians, plays and other events, in addition to the continued residency of the Royal Philharmonic Orchestra.

The Marina Theatre does not have customer parking onsite, however Battery Green car park is a 2 minute walk away. Use NR32 1DH. Parking is free after 6pm. More car parking spaces can also be found at Clapham Road car park behind Lowestoft Library, which is roughly a 5 minute walk from the Theatre.

If you are travelling by train, Lowestoft Train station is roughly 8 minutes walk away and is serviced by trains to and from Norwich and Ipswich where you can connect to the East Coast Mainline to London. Visit www.greateranglia.co.uk for more information. Alternatively, Lowestoft Bus Station is roughly a 5 minute walk away for regular services to and from Norwich, Great Yarmouth and Southwold. Visit www.firstgroup.com for more information.

East Coast Cinema is located a stone throw's away from the promenade and Lowestoft Beach. The cinema's facilities include four-screen cinema rooms, fully digital with 3D available on limited screenings. Car parking is available to the rear of the cinema on the corner of Belvedere Road and St. John’s Road, with 160 spaces available.

Any of the auditoriums can be hired out and they are ideal for company meetings/conferences, birthdays and private viewings. For further information and current tariff, telephone 01502 564567 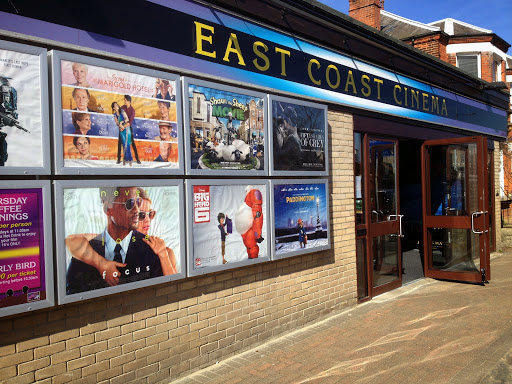